Late start or right time? Painting inspires Innu artist
to ‘be proud of who I am’ 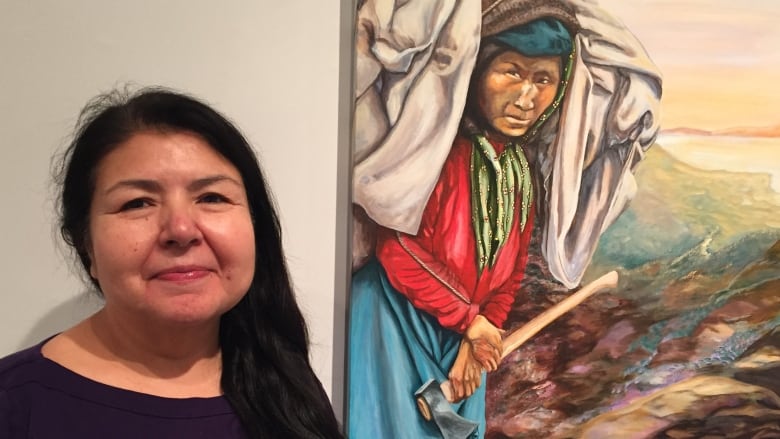 Artist Mary Ann Penashue says her art has encouraged her to embrace her culture even more. (Heather Barrett/CBC)

Mary Ann Penashue only started painting in her mid-thirties, but any perceived late start hasn’t prevented her from flourishing — besides, she had her hands full until then, anyway.

“I have four kids and I started painting while I was pregnant on my last child … my husband bought me paints for my birthday and they were just sitting there,” she told CBC Radio’s Weekend AM.

The feeling of completing a painting is a good feeling for me, I love that feeling.
– Mary Ann Penashue

Penashue, whose husband is former PC MP and minister Peter Penashue, found the time when her three oldest were at school and her youngest would nap.

And from those beginnings, the artist from Sheshatshiu has had her work displayed in Newfoundland and Labrador, Quebec and Ontario.

The Christina Parker Gallery in St. John’s is the latest home for her paintings — featuring an exhibit that opened Friday, April 20 and runs until May 12 — depicting Innu life titled Uapen Innut, which means People From the Sunrise.